The Court of Assistants 2021 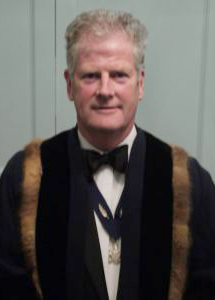 Lieutenant Colonel David O'Kelly was educated at Ampleforth College, Sheffield University and RMA Sandhurst before commissioning into The Green Howards in 1984.  He served for 22 years in the Army and was fortunate enough to see service around the world, including Germany, Northern Ireland, Kenya, Norway, Canada, Cyprus, Bosnia and South Africa; not to mention cricket tours to Berlin, Barbados, South Africa (again) and Australia.

In March 2006 he left his last serving appointment as Commanding Officer of Leeds University Officers' Training Corps to take up his current position as Regimental Secretary of The Yorkshire Regiment. Lieutenant Colonel O'Kelly is married to Penny and they are happily settled in North Yorkshire. They have two children: Charlie, now married, and Katie.  Among many sporting interests he is a keen cricketer and still an active (just) member of many such clubs and Chairman of one.  He sits on three Boards of Trustees and is a member of the Windsor Leadership Trust. He became Upper Clerk to the Company in May 2016.